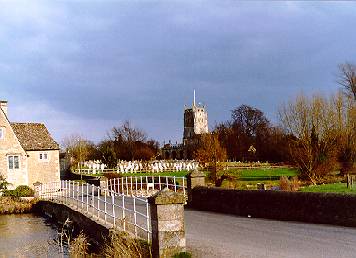 The name of the town is the modern version of its Anglo-Saxon name, Fagrinforda, which means fair, in the sense of being good, and ford, a place to cross a river. The River Coln flows rapidly from the Cotswold hills to the infant Thames, four miles away at Inglesham. There it almost doubles the size of the River Thames. At Fairford, however, in the past, it broadened out, became shallower and slower and was therefore easier to cross. Today there are two bridges and the river is channelled under them. 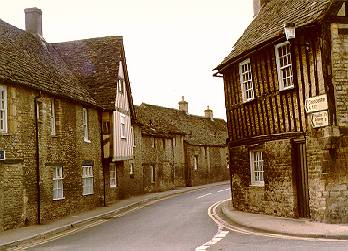 Fairford is nine miles east of Cirencester, which is the site of the Roman town of Corinium. After London, Corinium was the largest civilian town in Roman Britain. Recent excavations on the west of Fairford have revealed evidence of Iron Age, Roman and Saxon settlements which suggests that the site was occupied from 400 BC to 800 AD. As well as Iron Age buildings, a large Roman cemetery remains of a Roman farmstead and Saxon grubenhauser were found.

In 1850 an Anglo-Saxon cemetery was discovered at the west end of the town (Milton End) and the findings from that excavation are now in the Ashmolean Museum in Oxford. In 1998, preparations for extending some school buildings a quarter of a mile away revealed part of the village that would have been associated with the cemetery. The extensions were not continued.

The earliest record in which Fairford is named is dated AD850, when two hides of land were transferred to the Abbess of the Church of Gloucester. By 1066 it was an established Anglo-Saxon manor with the nobleman Brittric as its lord. He had before the Conquest spurned Matilda, who later married William the Conqueror, and after the invasion she demanded all his lands, and Fairford fell into her ownership. The Doomsday Book of 1088 noted that there were 21 hides of land with 56 villeins, 9 bordars with 30 plow-tillages, a priest and three mills. Speculation continues today as to the location of these mills. 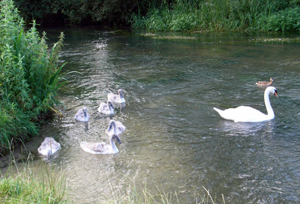 A market was started in Fairford in 1135. A corn market was well established by 1260 and by 1287 there were three annual fairs. Charles II granted a revised charter in 1671. In the early years of the 20th century the cattle market was large, filling the Market Place and the High Street, further animals being penned in a nearby street called The Croft. However, by the mid 1930s it had declined and came to an end. Today there is a weekly traders’ market, restarted in 1986.

The one building for which Fairford is famed both in the UK and abroad is its church. Whilst it is a fine example of the Late Perpendicular style, which has not been subject to extension, modernisation, alteration or ‘improvement’, it is unique in England for its complete set of medieval stained-glass windows. 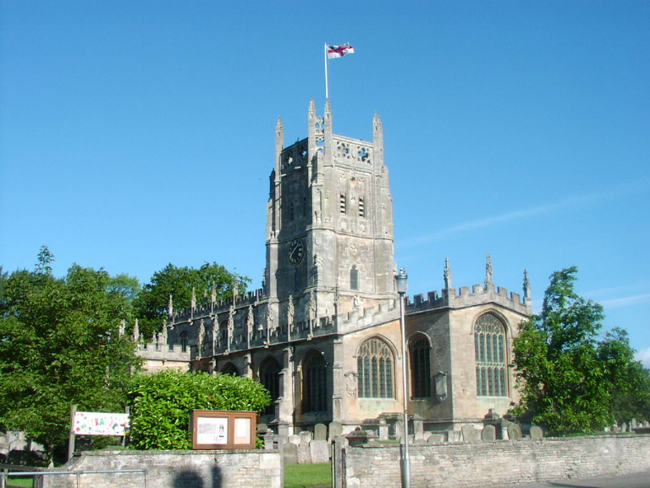 By the fifteenth century the Manor was held by the Earls of Warwick. In 1430, or thereabouts, Richard Beauchamp, known as the Great Earl of Warwick, built a church where there had long been a church building. A successor, Richard Neville, ‘Warwick the Kingmaker’, was killed at the Battle of Barnet in 1471 and in 1478 the Warwick lands, including Fairford, came to the king, Edward IV. In the next year he gave custody of the Manor to John Twynyho and his son-in-law John Tame, both being wealthy wool and cloth merchants of Cirencester. By the mid 1480s, John Tame had come to live in Fairford. This tenancy continued through the short reigns of Edward V and Richard III. John Tame was granted the Lordship of the Manor, and in 1491, in Henry VII’s reign, permission was applied for, and given, to rebuild the church. 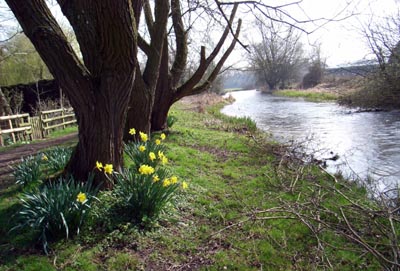 John Tame, and later his son Sir Edmund (knighted by Henry VIII), retained the tower of the Warwick church up to the level of the roof of the present nave, but replaced the upper part of the tower, and the whole of the nave and chancel. Each of the 28 windows are in stained glass installed in the first quarter of the 16th century, and form a complete picture bible. Obviously, individual pieces of glass have been broken, damaged or lost, and required replacement, but the windows have survived the Reformation of the 1540s, the Civil War of the 1640s, and World War II. They were removed to a safe place during World War II. There was a story, popular for many years, that as Oliver Cromwell’s Army advanced into the area, the men of Fairford rallied and removed all the windows in a single night and hid them away until the Restoration in 1670. When experts came in 1939 to remove the windows to the cellars of Fairford Park House for safe keeping, they took much longer than one night and the story was then questioned. Another theory was that at times when ‘graven images’ were being broken, windows and wall paintings in many churches were whitewashed over and some of the whitewash removed when different times prevailed. This theory held favour until Keith Barley’s stained glass workshop in York was restoring and preserving the windows (1988 to 2010). They renewed some very old lead-work and found no signs of any whitewash which would have lodged in the lead and not been removed by later washing. So the mystery remains – how did Fairford’s windows survive troublesome times in the sixteenth and seventeenth centuries? In 1912, an extra policeman was stationed at Fairford specially to guard the windows against attack by the Suffragettes.

Parties can be given conducted tours of the Church and its windows by a request to the Parish Office (01285-712611). The guides are all retired volunteers, so please give them plenty of advance warning – you know how busy retirement can be.

The town flourished in the 18th and 19th centuries with the coming of stage-coaches. There were four or five coaching inns, of which only The Bull remains, although traces of the others can be seen on their former sites.

The railway eventually came to Fairford on 15th January 1873, linking the town to Witney in Oxfordshire. There had been an earlier attempt to create a direct line from Cheltenham to London which was to have come through Fairford. The station was a mile from the centre of the town, but people who wanted to use it were resigned to walk that distance. On Saturday 16th June 1962 the last train ran from Fairford, the line being a victim of Dr Beeching’s axe. In its time the line had brought coal for the Fairford Gas and Coke Company, formed in 1852, one of the first in the country. The company stopped local production in 1936, but stored gas until 1972 when it closed. Today, Retort House marks the former site. 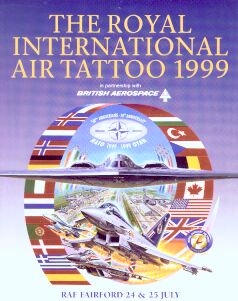 Besides the Church, Fairford may well be known to aviation enthusiasts. In the 1940s, an airfield was built to the South of the town which was to be a place for launching tugs and gliders to be used on D-Day and later incursions into occupied Europe. After the War, the Ministry of Defence retained the airfield and did not return it to other uses as happened with many other war-time airfields in the area. In the early 1970s, because of its long surfaced runway, it was used for the air-testing of Concorde and the training of the first batch of British Airways pilots. It returned to military use during the 1980s, when NATO stationed USAF air-refuelling tankers at Fairford, which were used in several long distance air strikes. With the end of the Cold War, the tankers were withdrawn and the airfield is used occasionally for NATO exercises.

When Greenham Common, near Newbury in Berkshire, was closed, the Royal International Air Tattoo transferred to Fairford and the skies around Fairford are filled every July with impressive flying displays, including the famous Red Arrows.