Lechlade on Thames
There is ample archaeological evidence of human settlement for the last 4,000 years, on the dry gravel terraces beside the river at Lechlade; the confluence of the Coln (just upstream) and the Leach (just downstream) with the Thames has much to do with the growth of the town and the prosperity of its people. Fresh water fish abounded, and it was easy both to cross the river and to embark upon it at this point; thus trade with other people down the river, to London and beyond to the Continent, has always played a part in the local history. Prehistoric stone tools and ritual burial sites can be seen from the air or found in the fields, and where modern industries have excavated sand and gravel, there has been evidence of bronze age, iron-age, Romano-British and Saxon dwellings and workshops and agriculture. One has to visit museums in Cirencester and Oxford to see the astonishingly rich finds from these periods, but evidence of an ancient trading town with an active inland port remains all around us today. 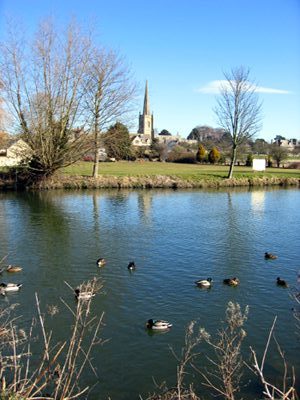 In 1859 Louisa Wheeler, daughter of a Lechlade blacksmith, painted the scene from the towpath on the south bank as she saw it; St Lawrence Church was rebuilt partly with money from wool merchants (who dedicated a chapel to St Blaize, patron saint of wool-combers) in the 1470s; surely its elegant spire (which was added a little later) was what was referred to by the 16th century travel-writer, Leyland, as a “pretty pyramid of stone” in the market place. To the left of her picture is a wharf with coal stacked high, and buildings that date from before the elegant toll bridge was opened in 1792. The inland port was here in the 17th and 18th centuries, when commercial competition with other wharves (downstream towards Buscot) was fierce, and large quantities of salt, cheese, and sometimes stone and wool were shipped down to Oxford and London.

Lechlade was also then a staging post on the London-Faringdon-Cirencester-Gloucester coach route, and local farmers and merchants were building and rebuilding their houses. The local builder and architect Richard Pace left a splendid legacy of Georgian buildings, around the town – look for the distinctive fan-lights over many of the front doors.

The barge depicted in the 1859 painting, was no doubt a traditional one, powered by sail (wind & current) downstream, and drawn by gangs of ‘haulers’, or donkeys, mules or horses, upstream, bringing goods bound for Gloucester and the Cotswold market towns.

During the 18th century most of the ancient “flash weirs” along the navigable stretches of the Thames were replaced with pound locks, the highest of them at St John’s Bridge, Lechlade, and a nationwide network of man-made waterways was built. The Thames & Severn was opened in 1789, and joined the River at Inglesham roundhouse & lock. The building on the left of the painting became (or was built for) the Agent’s House, and by then Parkend Wharf (and the Free Wharf – just off the picture to the left) were the eastern headquarters for the canal trade, which included much coal and roofing slate, etc. from the mines and quarries in the Forest of Dean and in Wales.

The rapid expansion of railways had put most canals out of business by the beginning of the 20th century, and the 1920s photo below reflects the new economy of Lechlade, as a venue for leisure seekers. At this time there were many grand water carnivals at Lechlade. 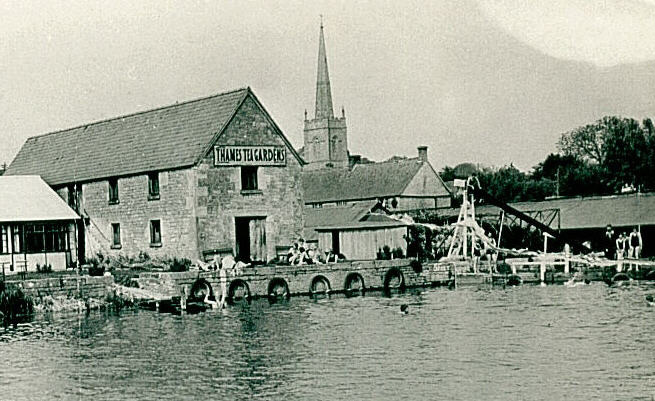 The storage barn had been converted to new use, with various other buildings and extensions, and from the wharf inlet by Halfpenny Bridge many small boats were available for hire; holiday cruisers and houseboats were about to become popular, even as far up-river as Lechlade.

By the beginning of this 21st century, the scene Louisa Wheeler painted had changed again. The towpath is now part of the Thames National Path, the buildings you see below are all within a Conservation Area, and the inland port (now including a large Marina) is poised for development as part of the Cotswold Water Park and as the eastern gateway to a Canal with restored navigation across and through the Cotswolds.

Iconic One Pro Theme | Powered by Wordpress
We use cookies to ensure that we give you the best experience on our website. If you continue to use this site we will assume that you are happy with it.OKCookie Policy